Ladies And Gentlemen, My Name Is Paul Heyman 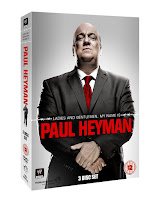 If you are a "Paul Heyman Guy", chances are that you'll have already seen his 2014 DVD/Blu-ray. But even if you haven't, or if you're not a huge Heyman fan, you should still make it an aim to watch it: I will delve into the details shortly but, suffice it to say, this has one of the best documentaries ever produced by WWE and a generous amount of bonus footage.

The main feature, as stated, is a two-hour+ documentary on Paul Heyman, who has had quite the career in pro wrestling. Breaking in at a young age as a photographer, he used his knowledge and his soon-to-be-signature gift of the gab to learn more about the wrestling business by attending production meetings and booking shows. As he built up contacts and increased his understanding of the inner workings of the industry, he found a opening as a manager, first making waves in the AWA and the Memphis territory before progressing to what was about to become WCW in the late 1980s. An eventful run there saw Heyman (as Paul E. Dangerously) gain notoriety as one of the best young managers in wrestling, as well as one of its most detestable on-screen villains, boosted further by his run in the announce booth alongside Jim Ross.

After the WCW journey ended, Heyman almost left wrestling, but was persuaded to assist Eddie Gilbert with booking at an unknown promotion called Eastern Championship Wrestling. In 1993, Heyman stayed when Eddie left and became head booker, and in 1994 he renamed the promotion "Extreme". ECW had officially arrived, and for the rest of the decade, Heyman and his talent pool created an unorthodox, violent, sexual, bloody and unforgettable wrestling product that influenced the WWF's Attitude Era and changed sports entertainment forever.

When ECW met its demise in 2001, Heyman joined the WWF and, over the next six years, he did everything from announcing to booking to managing to heading up the OVW developmental territory. An acrimonious split near the end of 2006 seemingly ended Heyman's wrestling career but, after a few years of enjoying life as a new father and pursuing a variety of projects, some of which he continues to run, everybody (including Paul himself) was shocked when he returned to WWE in 2012, at the side of Brock Lesnar, and has been employed as an on-screen character and a promo master ever since.

All of this makes for an intriguing tale. But what makes this documentary special is its subject. Heyman is someone who uses many words but wastes none of them, and when telling stories (and there are many of them here), he captivates you and holds your attention constantly. And of course he is honest, sometimes to a fault, as we learn the full details of virtually everything being discussed, whether it's his somewhat sneaky methods to become an unofficial WWF photographer; his abrasive nature on commentary with JR; his (pardon the pun) extremely perfectionist nature in coaching ECW stars, especially on promos; his pride in writing SmackDown! and building its creativity to the point where it was beating Raw in the ratings (to the chagrin of many in WWE, Paul notes); his opinions on the best-forgotten second incarnation of ECW; and, well, virtually anything he discusses or is a discussion point of. The extra interview clips are well worth watching for the same reason: the tales behind his heat with Jerry Lawler in Memphis, his methods behind identifying Tod Gordon as the "mole" of ECW, and his alleged attempts to invade an online Raw production meeting are at times breathtakingly honest.

As the last example suggests, we also get many comments, virtually all of them truthful opinions, from a wide variety of talking heads, and it's easy to see who is and who isn't a "Paul Heyman Guy" (or Girl). Accompanied by relevant footage (most notably when discussing ECW, where we get candid unseen footage from behind the scenes and even a famous clip shown in the movie Beyond The Mat filmed before the first ECW PPV Barely Legal), the documentary is one giant gem. To put it into context, I originally watched this when it was first released, but when reviewing it, I wanted to watch it again (and I did), partly to refresh my memory on some parts, but largely because it was that good that I just wanted to see it again. The only gaps are a lack of depth on Heyman leaving WCW (which Paul notes is due to legal reasons) and Heyman leaving WWE in 2006 (we get some discussion but not a lot, perhaps in case it impacted on Paul's current WWE run), and no talking head appearances from Vince McMahon, who could have added much weight to some stories (e.g. Heyman's WWE writer stints, and when Paul discusses the WWF's financial support to ECW). But otherwise, this is a perfect wrestling documentary, one of the best (if not the best) that you will ever see produced by WWE.

The DVD boasts a large number of extras. Along with the aforementioned bonus stories are literally dozens of promos spanning his entire career, from his Paul E. Dangerously days in the AWA and WCW, to the period in which he transformed from manager to promoter in ECW, to his most memorable WWF/WWE segments (a 2001 SmackDown! verbal onslaught of Vince, his incredible shoot-style promo at ECW One Night Stand 2005, and various 2012-2014 "moments" are the highlights of this section). And there are a couple of extra matches which in some way feature Paul, some as an active competitor, although as a non-wrestler with fewer ring skills than Vince McMahon or even Eric Bischoff, it's no surprise that the bouts aren't exactly five-star epics. The Blu-ray has even more bonus chapters to the main feature, and includes Heyman's outstanding "21-1" promo from the night after WrestleMania XXX where, in his words, "my client BRRROCCCKKK LLLESSSNNNARRR conquered The Undertaker's undefeated streak at WrestleMania!"

In hindsight, while the DVD was a welcome release in mid-2014 and a very big seller amongst fans, it's a shame that it wasn't released this summer instead, because Paul has delivered arguably the greatest promos of his career over the last twelve months. The man has such a captivating blend of harsh reality, hyperbole and at times humour that virtually all of his segments are must-watch. And while Brock Lesnar's on-screen reputation as a human destruction device has never been stronger, it is unquestionable that his persona would not be half as convincing without Paul Heyman to talk him up. His promos are unpredictable at a time when predictability is the norm, and even the encounters which look run-of-the-mill on paper are elevated to become can't-miss due to Heyman's brilliant delivery and masterful hype techniques.

Which is all a testament to the man himself, and what a true legend he is in professional wrestling. By 1992, he had established himself as a top manager and, had his career ended at that point, he would have been fondly remembered as one of the top ten managers. However, he went on to guide ECW and influence a permanent change in the wrestling business, so had he withdrawn from wrestling in 2001, he would always have been remembered as the massively vital force behind the phenomenally influential ECW. But here we are in 2015, and he will now be remembered just as much for his verbal skills - as arguably the greatest microphone man in wrestling history - solely due to the strength of his recent promos, if not more so. And for being the first performer to react (and oh, did he react) when his advocate Lesnar beat Undertaker at Mania 30.

That's even more impressive when you consider that promos aside, Heyman doesn't get involved in Brock's matches whatsoever, but since his return, he has been an integral role in making each one either happen or seem unmissable. Case in point: the Lesnar-CM Punk conflict, which resulted in a classic at SummerSlam 2013, revolved entirely around Paul Heyman. The man is a legend and, with the exception of Vince McMahon, is the greatest non-wrestler ever in the business and a sure-fire future Hall Of Famer. Hell, some might say that he has now surpassed Bobby Heenan as the greatest manager ever. How many people could do that in the manager-stricken times of 2015?

So, just like the matches that he hypes, Paul Heyman's DVD is must-see. I would recommend the Blu-ray due to the worthwhile additional content, but the standard release would also suffice. I was going to give this a perfect 10 but the matches do weaken it, even if they are actually the best examples one could find of Heyman in an actual wrestling capacity. But even so, if you don't own this, buy it today; it's one of the best overall packages that WWE has ever released, and it's not even on a wrestler. In fact, to achieve that may end up being Paul Heyman's greatest accomplishment.